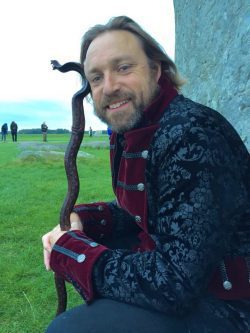 Mark TJ Keane following a personal awakening over a decade ago has devoted his life to Spiritual Enlightenment. He embarks on this quest as a very real, tangible and achievable goal and inspires others to do the same.

Mark runs Sleeping Serpent, an organisation dedicated to bringing elevation to the world.

Kundalini Dance, where Mark uses his natural ability to use the medium of dance to reach states of absolute bliss and ecstasy. He trained as one a certified Kundalini Dance teacher in Byron Bay, Australia in 2005, one of the first to do so, and brought this practice to the UK in 2006, founding Kundalini Dance UK.

Kundalini Yoga Bristol, Mark is a fully trained and certified Kundalini Yogi. Having practicing this most powerful form of Yoga for over a decade, he qualified in Anandpur Sahib, Northern India in 2005 with 3HO in the residence of Yogi Bhajan. Mark brought Kundalini Yoga to Bristol in 2006, and is one of the most recognised Kundalini Yoga teacher serving the South West of England.

Through Mark’s extensive personal experience with his own training and practice, and guiding others he is undoubtedly one of the leading experts on using the power of the Kundalini life force and Chakra system for healing and transformation.

Mark is famous for conducting ‘Kundalini Fire Dance’ journeys out in woodland or sacred stone sites, using shamanic drumming, ritual, dance and fire to honour the seasons and accelerate personal liberation at the eight points of the wheel of the old calendar which is more in harmony with nature.

Mark ran an official group, known as Eckhart Tolle Bristol, dedicated to following the wisdom of enlightened master, Eckhart Tolle, and still runs workshops known as ‘Days of Presence’ where you are guided into a deep state of meditation connecting you to the truth of who you are, the ground of being.

In addition to Sleeping Serpent, Mark also reignited the ‘Conscious Clubbing’ movement in the UK in 2010, which are alcohol, drug free dance events with positive energy and superfood. This has now evolved into the most advanced system of natural ecstacy through a powerful combination of Cacao Ceremony, Kundalini Yoga, Kundalini Dance, Conscious Clubbing and a Gong Bath, and is known as ‘Kundalini Clubbing’.