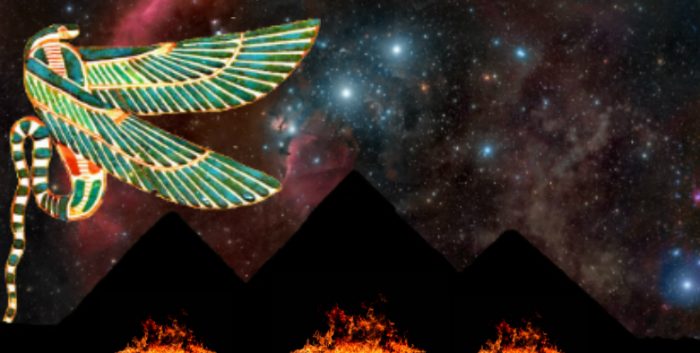 Long ago, before rational thought became the lens through which we saw the world, there existed a perception, and a knowing which was rooted in something far deeper within our collective imagination…the serpentine force of creation.

The serpent force was understood right across the ancient world. Although perhaps no other place, or time has grasped such a profound understanding of the serpent mysteries, as Kemet (Ancient Egypt) where the force was known as the Uraeus. This wisdom ensured Kemet endured for millennia as the light of the ancient world.

We come together to celebrate May Day/Beltane, and rediscover the British festival’s ancient connections to Ancient Kemet. Our famous dance around the May Pole is synonymous with the calling up of the serpent of creation, the personal and Earth Kundalini. For our purposes we can find similarity in the ritual the Pharaoh would perform, known as the raising of the Djed Pillar, designed for the rising of the Uraeus/Kundalini Force to purify both the body/mind and the Earth/matrix. The sacred, purifying bonfires that were burned at Beltane, and the other ancient fire festivals of Ancient Britain are represented by the Pyramids of the ancient world, finding their fullest expression in the Pyramids of Giza. Both perform the same function of cleansing the Earth, raising the collective vibration, and opening up the portal between the worlds. Even the word pyramid translates as mountain of fire, and derives from the word ‘pyre’ for fire.

Indeed we shall spend time outside with our sacred fire, dancing, purifying and connected to the star systems that were so instrumental to Ancient Egyptians such as Sirius, Orion and Pleiades. We will also have the chance to work with pyramid energy and harness our innate ability for soul travel.

What we now know as Kundalini Yoga, which I brought to the West Country in 2005, was practiced in Kemet long ago, and was known as Smai Tawi. At the heart of this practice/wisdom, was the Uraeus, known as the Kundalini Shakti force in India. This has seen a recent resurgence in the form of Kemetic (Egyptian) Yoga. We shall explore the more potent aspects of these ancient teachings in order to guide the serpent of light up through our spines, in order for our mind’s eye to shine bright once more, thus elevating our state high above the modern afflictions of stress, anxiety and depression, into a new state of divine alignment, ready to consciously evolve into co-creating the ‘New Earth’.

Kundalini Dance, which I brought to the UK in 2005, has always had the teachings of Isis at its heart, and her deep wisdom, guiding us into, and in through the wheels of light, the seven chakras. This is powerful work which will unblock any kinks in your energy field, clear past trauma, and unlock the Temple Priestess and Priest Serpent Dancer in you, taking dance and celebration back to its roots of the sacred and the ecstatic.

Kemet was famously the birthplace of Alchemy, which was brought to mankind by Thoth (Hermes Trismegistus) which has continued, largely in secret through the dark ages, to this day in the West. Far more though, than turning lead into gold, it is a powerful path to the illumination of the soul, which shall rise up out of the darkness of the unconscious mind. Illumination through Alchemy is our heritage, and our birthright here in the West, and is equivalent to the more open, and therefore more well known paths of Enlightenment in the East.

We shall explore the long lost 7 operations of alchemy, and in so doing, illuminate this subject which has been enshrouded in mystery for so long. However, we shall work in conjunction with the familiar 7 chakras akin to Kundalini Yoga and Kundalini Dance in order to fully embody the alchemical process, in a syntheses of Eastern and Western wisdom. In this way, we shall breathe new life, and bring a fresh new perspective, and clear understanding to the long lost secrets of alchemy, and the ancient myths of Egypt.

Recent discoveries in the enigmatic sunken cities of Canopus and Thonis Heracleion have shed new light on the ancient long lost rituals of the mysteries of Isis and Osiris. Ritual objects never before seen in the modern era have now resurfaced from the deep, elucidating the ancient hieroglyphic texts.

Riding the Uraeus serpent fire in meditation, we shall enter the sacred King and Queen’s chamber of the Great Pyramid of Egypt, where the initiations, rituals, sacred ceremonies and shamanic journeying were most poignantly performed in all the land, and together we shall uncover these mysteries of Isis and Osiris.

In so doing, we shall alchemically unite the Divine Feminine and Divine Masculine within us all, giving birth the the highest prize in the land…the philosopher’s stone of pure being! This will bring you into the deepest state of perfect, profound, peace, in the divine alignment of your authentic self.

To support personal and planetary healing and awakening, we will be channeling a local earth energy line that runs right through the Pepperhill Estate, and actually connects to England’s most famous energy lines, the Michael and Mary Lines, which run through Glastonbury Tor and Silbury Hill at Avebury, Ancient Britain’s own Pyramid legacy.

Over the course of these few days we will have time to work with many of the Neteru (Gods) of Kemet such as Ma’at (Truth Alignment), Thoth (Magic  & Wisdom), Anubis (embracing the Underworld), Horus (rebirthing) who are still available to channel and guide wisdom to bring light to the darkness of our age, which comes in the form of ignorance and ego. Prepare to transcend the lower energies that have held back humanity for too long, and transform them into a place of pure focus on the clear light of pristine awareness.

This is an invitation across time and space, stirring ancestral memories from long ago, which unlocks the potential to elevate our consciousness back to the stars, where we all come from.

Although no experience is required in Kundalini Yoga, or Kundalini Dance, or even knowledge of Ancient Egypt, this retreat is designed for those who are drawn towards a deeper understanding of Ancient Egypt, and how this relates experientially to Yoga, Ecstatic Dance, Alchemy, Kundalini and Chakra Activation, Shamanism, Meditation, Ritual, Soul Travel, and more.

This retreat is being held at a beautiful, peaceful and secluded place, deep in the Quantock Hills, Somerset, not far from Taunton. There will be space and time to explore, for those who are drawn into the wonders of nature, such as the forests and plains, which will be full of life and the joys of Spring.

Cost is just £399 all inclusive of 3 nights accommodation on location and inclusive all meals, and snacks which are high vibrational, organic, vegetarian, super nutritious food, partly inspired by Ancient Egypt. All dietary needs individually catered for – just ask.