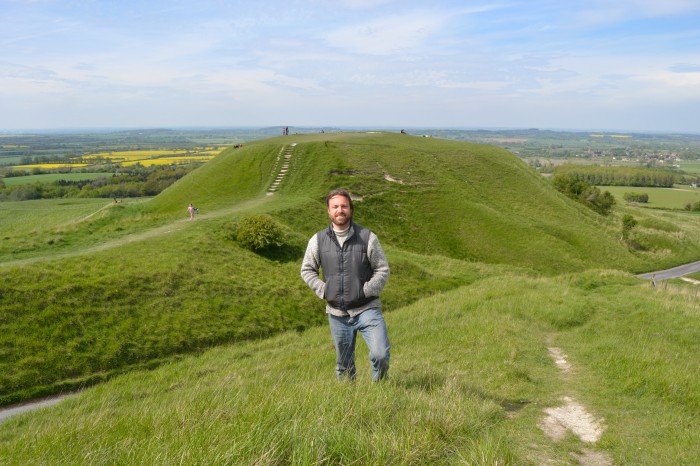 It was Beltaine weekend, more commonly known now as May Day in Great Britain. I had the honour of finding myself in one of the few truly ancient cottages that still graces the high street of magical Glastonbury, known to the locals, as Avalon. I was amongst a small group of incredibly gifted musicians, one might even say world class musicians, preparing for the ‘Dance of Creation’ workshop that I had been invited to. As the intoxicating sounds washed over my body, captivating the essence of my soul, forever longing for such depth and beauty, I got handed a book written by a local. It was called ‘The Key to the Secret’, and talked about using the ‘law of attraction’ which the film/book, ‘The Secret’ has now made famous. It mentioned that one of the keys to enhancing the law of attraction was to go to power spots, and one of the most powerful in the land it said was Dragon Hill at Uffington.

After a beautiful night dancing, I walked into Gothic Image, the first New Age shop to appear in Glastonbury in the 1960s, and there I discovered a book called ‘The Spine of Albion’ which talked about the ley-line, the Bellinus, and  its female countepart, Ellen, that weaved their way up the central axis of Britain, much like the Kundalini weaves its way up the Sushumna within the spinal cord. Having already walked a significant part of the Michael Line which runs East to West from Cornwall to East Anglia, it was very exciting to discover it was bisected by a vertical force, as if to mirror the Kundalini Yoga, and Kundalini Dance I have been practicing here in Britain for over a decade.

I took it as a sign to make a pilgrimage to Uffington.

As I approached the area that encloses Dragon Hill, known as the amphitheatre, a wave of peace washed over me, I now identify with what is increasingly becoming known in certain enlightened circles, as the ‘subtle energy’. 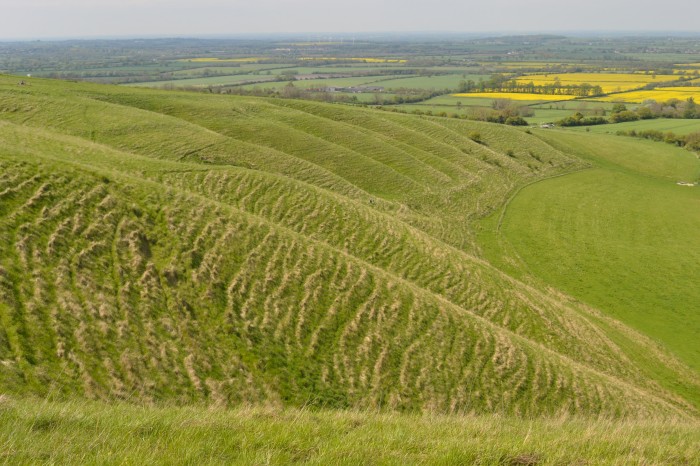 What strikes me above anything else about this entire area rich in archaeology is not what man has imprinted, but in the inherent beauty of the landscape which surely speaks of an underlying power, so great it draws in people to this modern day. So many people were drawn, in fact, that I was forced to park in a disabled parking spot.

I found my solace away from the masses who know only to follow the line carved out by he who follows, and he who follows him. There I sat marvelling at the undulations that curve around this marvellous bowl of nature. These undulations form a wave with such beauty as it rises and falls around the curvature of this landscape that I am sure this is why our ancestors, the ancients deemed it sacred land. This coupled with the feeling, the feeling they were no doubt more attuned to than we are accustomed to in this day and age of unparalleled distraction. 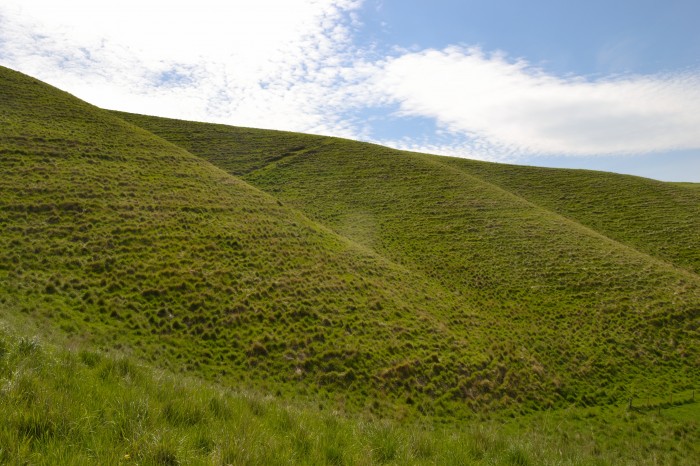 A track led me to descend to the base of Dragon Hill so that I may get a feel for its entirety as I approach my ascension. A few curious souls adorn the top of this hill, which has been completely levelled by our forefathers, like some ancient ceremonial pyramid fit for a higher purpose. 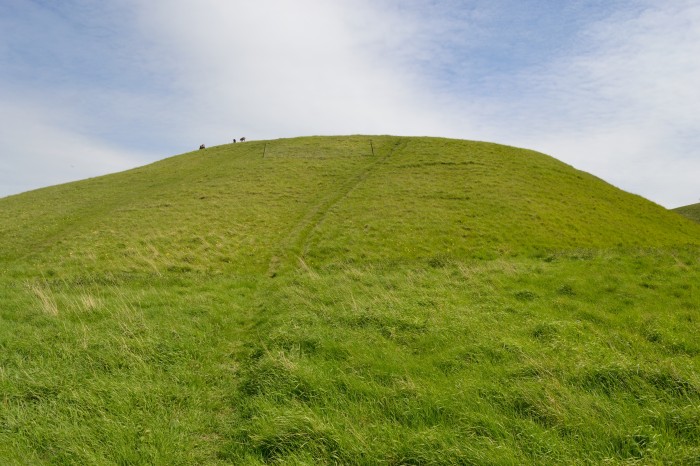 At the top I sat by the area famous for having no vegetation, where legend has it the Dragon’s blood spilled as Saint George laid waste to the Dragon. There I was delighted to encounter children who, with their imagination, saw a dragon’s head in this spot, and took It upon themselves to reenact the story of Saint George and the Dragon. Having been born on St Georges Day, celebrated just 2 week previous, this indeed stirs something deep with my soul’s purpose. 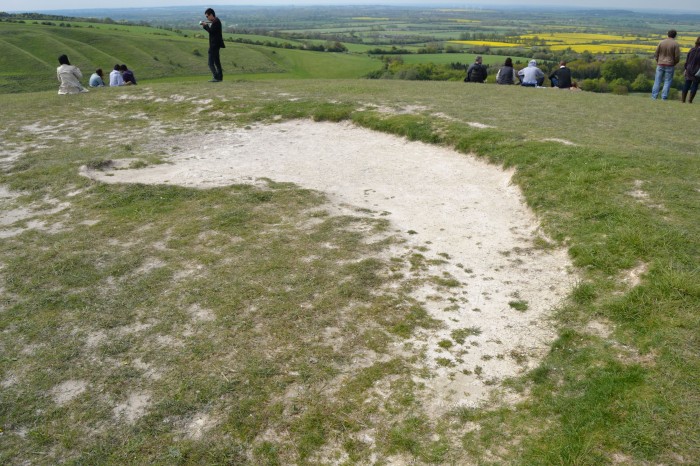 Then I descended the dragon’s back and ascended the hill famous for the carving of the Uffington Horse, which may not actually be a horse, but a stylised dragon. There I was happy to find children busily enjoying the ritual of laying down chalk upon the carving. 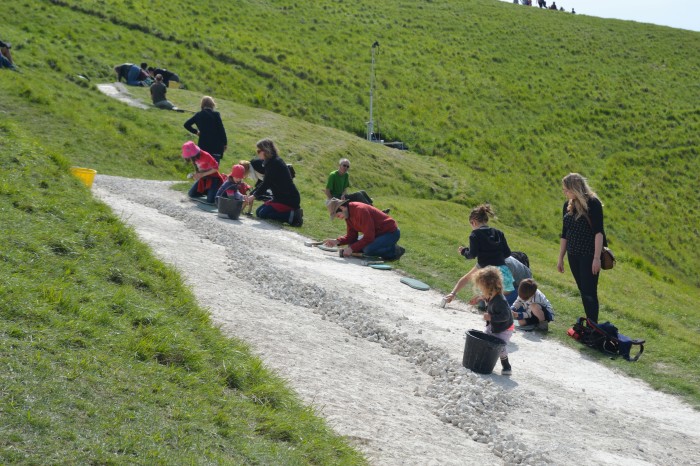 Legend has it that if you turn upon the dragon’s eye (for local legend knows the carving as a dragon, despite archaeologist’s conviction that it is a horse) three times clockwise then your wish will  come true. I was torn, as the sign said to respect the site and not walk on the ‘horse’. There was also, somewhat unusually, a camera, on a very tall pole, overlooking the horse/dragon. Therefore I approached the rim of the eye and subtly turned three times, and invoked peace in the land, and abundance in my own life, so that I may share it with other like minded souls. 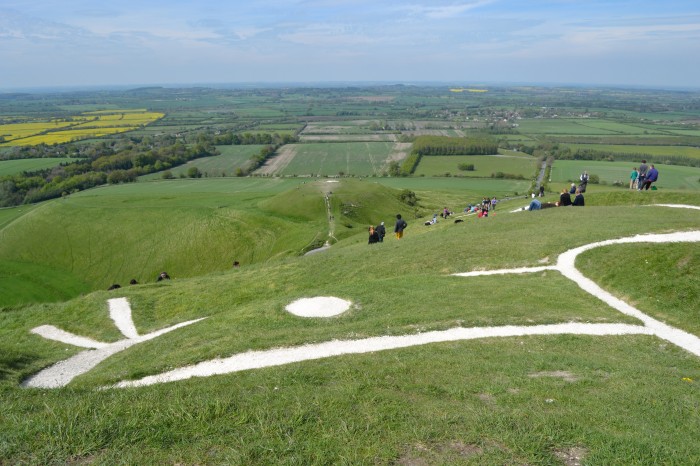 Then whilst everyone else that was visiting the site circumnavigated the ancient ramparts which are now simply earthworks, I gravitated to the very centre of the Uffington Castle to pick a dandelion flower head. It was interesting to read later that at the centre of the castle is a ‘node’, where the two energy lines, Belinus and Ellen cross.

Beyond the castle, almost touching its banks is the ancient track of the Ridgeway which shone a gleaming white from the chalk in the Earth,  like the Yellow Brick Road of Oz. Having grown up in an area known as the Ridgeway, this strikes a chord within me, stirring a longing to follow the path, as if it somehow will lead me…home…to the time of innocence. 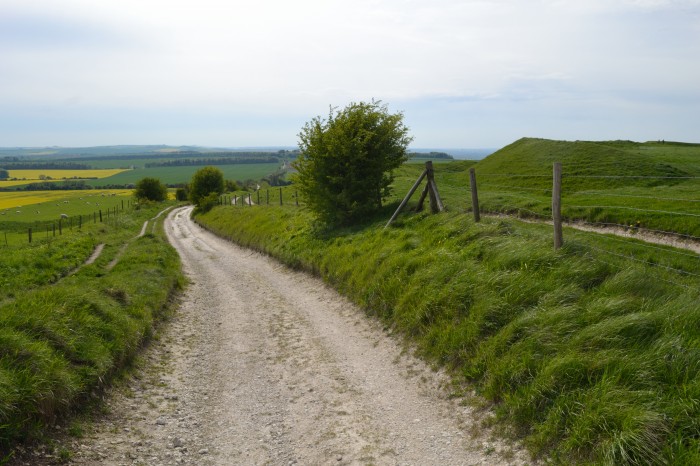 On realising the distance to my next destination, I decided I needed some more substance and picked another dandelion, and to go with it a nettle leaf. Now nettles are a great source of iron, and a forager’s dream for they are hardy plants that grow almost anywhere in abundance. The secret to picking nettle leaves is to pinch them from the back of the leaf and press a few times to de-activate the sting, then you may pluck the leaf. I find it is a good idea to then carefully fold the leaf a few times, being sure not to touch the front of the leaf, then to squeeze the leaf a few times, then it is ready to eat! I discovered that the nettle leaf compliments the dandelion leaf perfectly. Also nice to think of it symbolising the union between the Sun (Dandelion) and Divine Masculine and the Earth (Nettle) and Divine Feminine. I am trying hard not to make any jokes here about being stung by the divine feminine!

I travelled long enough along the Ridgeway, to reminisce further of my journey as a Pilgrim to the famous Camino de Santiago de Compostella in Northern Spain, where I travelled on to the destination of the entrance to the Celtic Otherword, Finisterra. Finisterra literally translates as The End of the Earth, and sits at the most Western point of Europe. Then I travelled further still to the lesser known ancient pilgrimage spot honouring the Fertility Rock at Muxia, which afforded me a journey’s end, a divine vision I will never forget, of a rose cross in the sky. The rose cross of course being akin to the cross of St George, and in its essence illustrating the divine union of the four Earthly Elements, and the limitless Spiritual Sky. 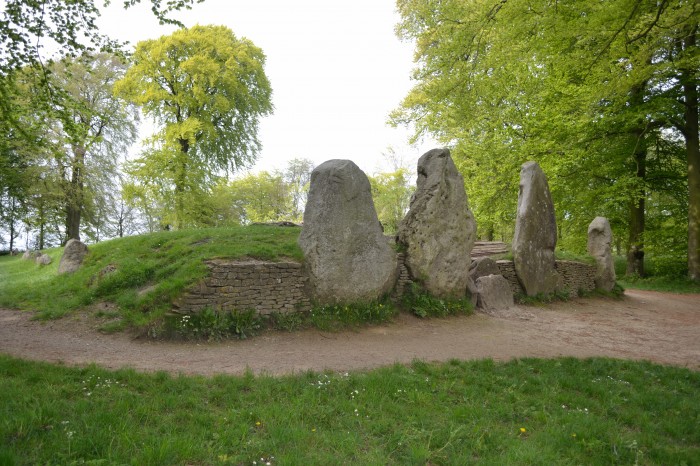 Finally I arrived at today’s chosen journey’s end for the wandering Pilgrim, of Wayland Smithy, which is an ancient long barrow, not dissimilar to West Kennet Long Barrow at Avebury. I walked to Avebury on a week long Pilgrimage from Wellington along Britain’s most famous ley-line, or energy line, the Michael Line, and had the honour of spending the night at this very sacred place, a place so powerful it stops the mind retuning your whole being to the depth of silence that penetrates all. Interestingly the Ridgeway connects both the Avebury and Uffingfton complexes, which gives me a tremendous sense of reassurance somehow. On approaching Wayland Smithy I again was struck by a certain feeling of peace, which often accompanies sacred sites, and was then struck by the impressive sight of the sere magnitude of the site’s standing stones which guard the entrance to the barrow. One can actually enter the barrow, but not anywhere near as far as you can at West Kennet. Yet, one can easily meditate within the sacred chambers and contemplate the legend, that it was here that Merlin commissioned the Blacksmith Wayland to make the sword, that would unite and heal the land of Albion, under King Arthur’s rule…Excalibur!

My journey is complete, such a remarkable network of ancient sites here at Uffington, all connected physically via the Ridgeway to Avebury, and energetically to the length of Britain by the Belinus line. Truly I feel a new chapter has only just begun, one of weaving more pilgrimage into this life. What the future holds I can not say, I just have to be truly present to allow this magical journey to unfold in its own time.